The Alleghany Highlands Arts Council has been serving the region since 1953.  Our community can take great pride in the performing arts events  which are presented to it’s residents and visitors.  This year is not only EXCITING, it may just be the BEST yet…

The musical tells the story of four men who work at a gas station and two waitresses at the adjacent “Double Cupp Diner,” located somewhere between Frog Level and Smyrna, North Carolina. The music is mostly from the country rock/pop music genres. They perform on guitars, piano, bass and kitchen utensils. Toes will be tapping and spirits will be lifted to songs such as an accapella rendition “Fisherman’s Prayer”, the melancholy tune “Mamaw”, as well as fun numbers like “Farmer’s Tan” and “The Night Dolly Parton Was Almost Mine.

Simply hearing the name Ben Vereen uttered invokes the magic and allure of Broadway. He has Tony Awards, Drama Desk, Golden Globe and Emmy Award nominations. From Broadway roles in Hair, Jesus Christ Superstar and Pippin, to films like All That Jazz, Sweet Charity, and Funny Lady, Vereen has ruled the industry. Therefore, it is no surprise that he can command any audience with charm and pizzazz. In a tour de force for our organization, Mr. Vereen has agreed to be an artist-in-residence in the Alleghany Highlands next season. While here, he will conduct a masterclass in acting that wehope to live-stream into classrooms at Radford University, Washington & Lee, JMU and Christopher Newport College. A dinner will be held in his honor where he will speak about the importance of the arts in today’s society, followed by a screening of the movie ALL THAT JAZZ.

Alleghany Highlands residents have a long-standing love affair with Maestro David Wiley and the Roanoke Symphony Orchestra. Patrons look forward to this joyous holiday presentation from one year to the next and always beg for their return. It’s Southwest Virginia’s largest holiday concert celebration and an unbeatable experience! Star soprano Joy Lynn Jacobs made her stellar RSO debut in 2014. Joy returns this season.. joining us “Home For The Holidays.”

Season Passes for the above ‘Performing Arts Series’ (featuring four shows) can be purchased at the Arts Council or on their website:  http://www.alleghanyarts4all.com/.

How to become a ‘Performing Arts Series’ (PAS) Season Subscriber?

Of course you may purchase tickets  individually for different shows, however, being a PAS season subscriber supports the Arts Council.   In addition, it makes seeing all four PAS shows a great saving.  PAS Season Subscriptions for students  $35, Individual $95 and Family $195.  With your subscription to this outstanding season you help build and strengthen a community rich in arts & entertainment.

As an added bonus PAS subscribers will be able to obtain tickets to the NEW ‘Arts Council @ The Masonic Series’ by showing their PAS season pass at the time of purchase.  Another great reason to be a season subscriber…

‘Arts Council @ The Masonic’ featured below:

Cashore Marionettes A performance by the Cashore Marionettes is a celebration of life. The program consists of a collection of engaging piecese incompassing a broad range of themes, each delivered with a simplicity that expresses the essence of the moment.

A CHRISTMAS CAROL Alan Menken’s spectacular musical adaptation of Charles Dicken’s A CHRISTMAS CAROL is a feast for the soul as well as the eyes. We watch Scrooge reflect on the passages or Christmas Past, Present and future and feel the transformation of a human heart. Drama, song and dance will ignite the holiday spirit in all who attend and the new Masonic Theatre is the perfect location.

‘Young Irelanders’ The Young Irelanders rock Irish traditional music, song & dance. Although still in their 20’s and 30’s, these performers have achieved more than most people would aspire to in a lifetime. They have performed for heads of state, Presidents of Ireland, US Presidents, the Queen of England, the President of China, Prince Albert of Monaco, Empress Michiko of Japan, performed at Radio City Music Hall, the Great Hall of the People in China, Kremlin State Palace in Moscow, the US Capitol Building, Fox Theatre in Detroit and the Pantages Theatre in Los Angeles. The artists have also toured as lead performers with Riverdance and Michael Flatley’s Lord of the Dance, been soloists on PBS Special’s, shared the stage with Bono, and have recorded with Ronnie Wood (Rolling Stones) and been chosen by Sting to perform for his exclusive private parties.

WOW, what a season and two sensational series!  All ages of citizens in our community and visitors can take advantage of this Arts & Entertainment extravaganza.  Support our regions Art Council and ENJOY.

Out of town?  Make plans to visit the Alleghany Highlands of VA.

on Zillow - Homes For Sale in Clifton Forge, VA 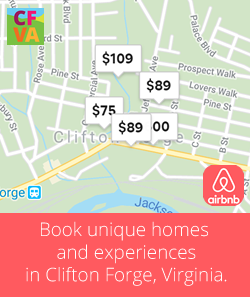